Constitutional reform / How sceptical are people in Britain?

How sceptical are people in Britain?

Politicians are often accused of misrepresenting reality in order to sell their policy wares. Yet their perceptions of a lack of trust in the political system can hardly be viewed as a distortion of the way British citizens think about their government. Since 1986, the British Social Attitudes survey has regularly asked:

How much do you trust British governments of any party to place the needs of the nation above the interests of their own political party?

As shown in Table 3.1, the responses reveal a sharp decline over time in levels of trust. The proportion saying they trust governments "just about always" or "most of the time" fell from 40 per cent in 1986 to just 16 per cent in 2009, following the MPs' expenses scandal. Over the same period, the proportion saying they "almost never" trust government rose from 12 per cent to 40 per cent. The decline has not been straightforwardly linear. In particular, trust is consistently higher just after an election, perhaps because casting a ballot gives voters the feeling they do have some influence over their politicians. Even so, the degree of trust recorded in 2010 was much lower than after the 1987 election. Meanwhile, levels of trust have actually improved a little since the nadir in 2009 and are much the same now as in 2006. It appears that despite the furore it evoked at the time, the MPs' expenses scandal has not contributed to any significant, further long-term erosion of trust. Even so, it is evident that Labour did not achieve its aspiration to reverse the decline in trust that had become marked during John Major's 1992-97 administration. If anything levels of trust fell away even more during its time in office. 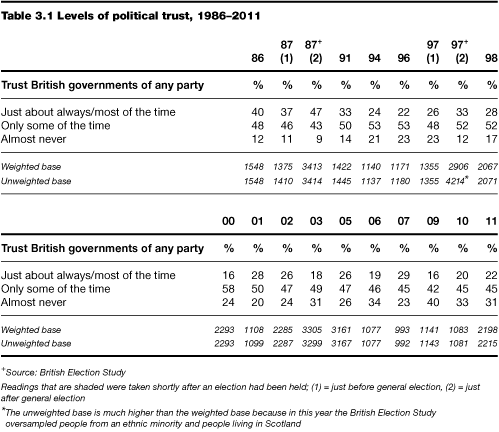 However, previous studies have shown that people's expressed levels of trust are sensitive to the way survey questions on the subject are worded and the particular aspects of trust that respondents are asked to evaluate (e.g. Citrin and Muste, 1999). We can check whether the picture of low levels of trust we derive from our regular question on the subject is, in fact, a valid one, by examining responses to a new set of questions asked for the first time in 2011. These questions asked respondents how much trust they had in the Westminster parliament, British politicians, British governments and - as a non-political point of reference - the police.

As seen in Table 3.2, the results confirm the picture painted by the original measure. Only around one in six people trust either British governments or the Westminster parliament "a great deal" or "quite a lot", while less than one in ten trust British politicians. By contrast, almost six in ten (59 per cent) indicate "a great deal" or "quite a lot" of trust in the police.1 Equally, whereas 57 per cent do not trust politicians "very much" or "at all", just 11 per cent say the same of the police.

We have, thus, found solid evidence of public scepticism towards politicians and governments. Levels of trust have fallen over the past 25 years and, despite some recovery since the MPs' expenses scandal, remain at a relatively low ebb. So how likely is it that the Coalition's constitutional reforms will succeed in reversing this trend?