The flow of migrants into Britain over the past 15 years has been the largest in British history. The public has reacted to this with strengthened demands for a reduction in migration and increasingly negative views about the cultural and economic impact of migrants on Britain. But even more strikingly, there has been a polarisation between different social groups in their concerns about immigration. While all groups have become more concerned, the trend has been greater among the less qualified and among less-skilled workers. 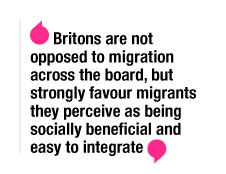 We have also sought here to move beyond aggregate views about immigration inflows and impacts to gain a more nuanced understanding of reactions to more specific groups of migrants. In three experiments, we looked at how migrants' characteristics were linked to public reactions. What emerges is a broadly pragmatic response: Britons are not opposed to migration across the board, but strongly favour migrants they perceive as being socially beneficial and easy to integrate. It is also clear that, despite the widespread concerns about cultural impact, qualifications trump origins. So professionals and high-quality students are regarded positively, regardless of where they come from, while unskilled labourers and poor-quality students are opposed, regardless of where they come from. Culture comes to the fore in the case of family reunion migration, where the economic case is less clear-cut and where difficulties of integration might be perceived as greater.

The Coalition's goal with immigration policy has been clear from the outset: less immigration overall, and a more selective policy on who is allowed to enter. Immigration minister Damian Green has spoken of a need to end an "addiction to foreign workers" and to focus on toughening selection criteria so Britain has "fewer and better" migrants.12 Among the criteria that have been debated are more stringent skills criteria for economic migrants, tougher English tests for family reunion migrants and stricter qualification requirements for students and accreditation tests for the institutions admitting them. Our evidence suggests that the broad outlines of this approach are in line with public opinion - more than anything, what sways British voters in favour of migration is the perception that migrants are highly-qualified. 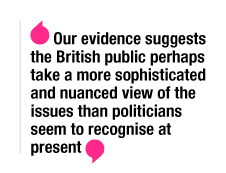 While the current policy framework broadly chimes with public demands for less and more selective migration, it remains poorly-designed to address more specific public concerns about different migrant groups. Limits are imposed on groups of migrants who do not concern the public, such as professionals from outside Europe, but are not imposed on other groups who generate concerns, such as East European labourers or family reunion migrants from more culturally-different regions of origin. Partly this reflects the constraints the current government must operate within, in terms of EU treaties and international law. However, it also reflects a tension produced by the desire to deliver a sharp overall reduction to migration inflows when many inflows cannot be controlled. The consequence is a pressure to impose sharp cuts to migration inflows regarded positively (again, students, professionals) in order to meet the overall target because other, less popular, migrant flows cannot be easily controlled by policy (e.g. eastern European workers). Given this tension, more targeted measures and limits focused on the groups which actually generate public concern might be preferable.  Our evidence suggests the British public perhaps take a more sophisticated and nuanced view of the issues than politicians seem to recognise at present, and, setting aside the current constraint, Britain would benefit from a policy response which reflected this nuance.