Immigration has reshaped British society in the post-war era, and in recent years has consistently been at the top of the political agenda. As an island nation with a global imperial legacy, the question of who we let into our country and why has a unique resonance in Britain. Attitudes towards immigration say something about our understanding of the fundamental relationship between citizens and the state, fairness and human rights.

Ever since social surveys and opinion polls began to ask questions on the topic in the 1960s, the British public has always favoured a reduction in the numbers of immigrants, even during periods when immigrant inflows have been low (Blinder, 2011b). However, the history of British immigration is one characterised by a gap between public attitudes and public policy (Hansen, 2000), with government's ability or willingness to reduce net migration often constrained. During the last century, a desire to extend and equalise subjecthood during the British Empire, a business need for cheap, unskilled labour and regional institutions and international laws all played a part in shaping policy in this area. Following large-scale immigration from Commonwealth countries in the 1950s, a more restrictive policy gradually evolved through a series of legislative reforms starting with the 1962 Commonwealth Immigrants Act and ending with the 1981 British Nationality Act. Migration flows were tempered rather than halted or reversed; while primary migration more or less ceased, family reunion inflows continued. A shift in emphasis was marked by the 1993 Asylum and Immigration Appeals Act and the incorporation of the European Convention for Human Rights (ECHR) in 1998, representing a new, more open approach driven by the election of New Labour and the realities of globalisation (Somerville, 2007). Labour migration controls were relaxed and tools to restrict asylum were initially limited during this period. Yet a backlash was just around the corner. The number of people seeking asylum in the UK increased threefold from 1996 to around 85,000 in 2002 (Blinder, 2011b). The institutions set up to deal with this particular inflow of migrants were unable to cope and the press and public felt the system was open to abuse and had lost its integrity. The political salience of the issue was not lost on the government or the press.1

In 2003, data collected by the British Social Attitudes survey on public attitudes towards immigration reflected the negativity surrounding the issue, with public opposition increasing sharply from the already high levels recorded in 1995.On the heels of the collection of these data, Britain experienced a large wave of immigration from Eastern Europe following the accession of eight countries (the A8 countries) to the EU in 2004 - which contributed to net migration peaking in that year at 245,000. The extent of this migration was not foreseen by the British government. Around 13,000 arrivals were anticipated (Dustmann et al., 2003), yet in 2004, 54,000 arrived as long-term migrants. While the nature of A8 migration is varied and often temporary, the population of A8 citizens in the UK is now estimated by the Annual Population Survey to be 872,000 (Vargas-Silva, 2012).

Since then, there has been a strong shift towards greater restriction in both policy discourse and policy implementation, which began under Labour and has continued under the Coalition. Coalition policy has been focused around an attempt to cap the overall level of net migration and a move to systems that aim to increase government control over migration flows to achieve this goal. Debate continues over the economic impact and fairness of this approach. Firstly, a points system is now in place for economic migrants, which distinguishes between migrants in terms of age, earnings, qualifications and employment to determine entry. According to the Migration Advisory Committee, students will be equally affected. The stated aim here is to attract the 'brightest and the best' despite concerns over the broader economic impact of this policy (Ruhs, 2011; Cavanagh and Glennie, 2012).

Secondly, extra-territorial measures have been adopted to reduce the number of asylum seekers arriving in the UK; and increased containment once in the UK aims to increase the number of asylum seekers that can be removed when their claims fail (Blinder, 2011a). Proposals to limit the numbers of immigrants arriving in the UK through family reunification have also been introduced.2 The stated aim here is to put a stop to abuses of the system, although concerns remain over potential violations of human rights.

So how have these policies fared? As Figure 2.1 shows, since 2004 both total and net long-term migration have remained broadly steady. Net migration is more volatile, falling to 163,000 in 2008 but then returning to 2004 levels of over 240,000 in 2010, while the total migration inflow remains almost unchanged at just under 600,000 every year. Recent shifts in net migration, the statistic which attracts the most media and policy maker attention, therefore reflect volatility in the number of people leaving the UK, not the number entering.3 It is clear that institutional and political realities continue to make sharply reducing immigration difficult: having opted out of initial restrictions on A8 migrants the government cannot formally control immigration from the EU,4 and as a result poorer Central European members such as Poland have continued to provide the largest source of labour migration. The humanitarian requirements of international law and the requirements of the ECHR make draconian restrictions on asylum or family reunion migration similarly difficult to achieve. While the number of people seeking asylum (17,916 in 2010) is now much lower than its 2002 peak, there is debate over the fairness of the government's approach to influencing this (Asylum Aid, 2010) and the impact of these measures on re-enforcing negative public attitudes (Gibney, 2011). 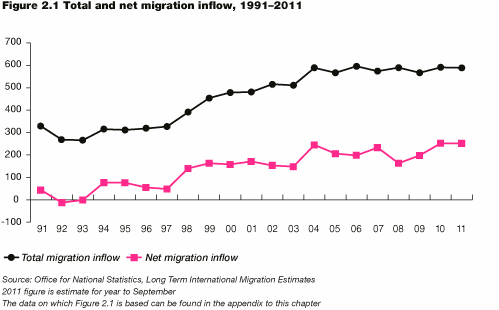 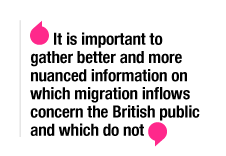 So while the shift in policy in the past decade has not yet achieved its stated aims, it does reflect a perception among policy makers that hardening public attitudes towards immigration demand a restrictive policy response. These attitudes are arguably further accentuated by two factors. Firstly, specific incidents - crises or scandals - have highlighted ineffective systems or incompetent personnel who are charged with managing immigration. These incidents may fuel the view that if immigration cannot be managed fairly and for the benefit of Britain, it should be halted completely. Secondly, it is clear that the public perception of contemporary migration flows is very different from that of policy makers. A recent study found that when thinking about immigration, people are far more likely to have in mind asylum seekers, who made up four per cent of immigrants in 2009, and least likely to have in mind students, the largest group in 2009 at 37 per cent (Migration Observatory, 2011). Given the complexity of contemporary migration flows and an intricate and constantly evolving institutional apparatus, it is important to gather better and more nuanced information on which migration inflows concern the British public and which do not, and how these perceptions link with attitudes to immigration per se.

In this context, the data used in this chapter were gathered in part to try to overcome the influence of misinformation, by collecting systematic and unbiased data on the public's views of a contentious and complex issue. They were also collected to try to elicit more nuanced views on immigration among the British public: if there is anti-immigration sentiment, towards which groups is this strongest and among which groups is this most keenly felt? In doing so, the chapter aims to provide an insight into the public response to the government's approach to reducing, or at least better controlling, immigration into Britain.