Views of immigration: inflows and impact

We begin with a review of British attitudes to immigration overall.

The period since the late-1990s has seen the largest inflow of immigrants to Britain in history. There are two ways we can assess how the British public have reacted to this. The first is to examine views of overall migration levels. Do the public want to see immigration reduced, and if so, how steeply? A second is to examine what impacts the public thinks immigration has had on British society. These two kinds of assessment are very different - individuals may favour reductions to immigration even if they feel the impact to date has been limited, because they may worry about future impacts. Conversely, a respondent may concede that migration has had negative impacts, but still support high migration levels, feeling that the benefits outweigh the costs.

The sensitivity of these items to changes in immigration may also vary. Demands for reduction may rise and fall in response to inflows, or alternatively respondents may 'default' to a demand for reductions in migration, irrespective of migration inflows, supporting reduced immigration as a way of expressing their view that any migration is socially damaging. Views about the impacts of immigration may shift in response to changes in settlement levels, often with a time lag as the overall effects of migration may take time to manifest, or respondents may treat the question as a backward-looking judgement on social effects going back over a long time period, in which case responses may not be sensitive to recent events. In short, there are many reasons for treating views about levels and impacts as distinct from each other, and worthy of separate analysis.

To explore the public's views about levels of migration, we asked respondents:

Table 2.1 presents the answers provided in 2011 and on the three occasions that this question has been asked previously. It highlights a sustained increase in demands for lower overall immigration since the question was first asked. The proportion of respondents favouring some reduction in migration rose from 63 per cent in 1995 to 72 per cent in 2003 and 78 per cent in 2008, just before the onset of the economic crisis. Since then, there has been a small decline, with 75 per cent of respondents in 2011 advocating a reduction in immigration overall and 51 per cent wanting a large reduction. Most of the increase in demand for reduction thus dates to the late-1990s/early-2000s, and the balance of public concern has remained broadly stable since 2003. However, the overall balance of opinion remains strongly in favour of the Coalition's stated policy aim of lowering immigration levels. It is worth noting, however, that nearly 40 per cent of respondents also supported large cuts in migration in 1995, when net migration inflows were very low. Part of this overall demand for reduction therefore seems to be insensitive to present migration levels - and may perhaps instead reflect a 'default preference' for reduced migration in all circumstances.

Turning to impacts, we consider two broad spheres in which these can occur: culture and economics. The perceived cultural impacts of immigration have become more salient as concerns over Muslim integration and Islamic extremism have grown, following riots in Muslim areas in 2001 and terror attacks in 2005 and 2007 (although, in practice, these were committed by British-born extremists). Meanwhile economic concerns have grown with reports arguing that migrants were outcompeting native Britons for scarce jobs, an anxiety which can only be magnified in the harsh economic climate following the recession of 2008-2009.

To explore public perceptions of the impacts of migration, we asked respondents:

On a scale of 0 to 10, where 0 is extremely bad and 10 is extremely good, would you say it is generally bad or good for Britain's economy that migrants come to Britain from other countries?

And on a scale of 0 to 10, would you say that Britain's cultural life is generally undermined or enriched by migrants coming to live here from other countries?

Table 2.2 presents the answers provided in 2011, compared with data from the 2002 European Social Survey, which asked almost identical questions.5 Although the British in the early-2000s strongly favoured reductions in migration levels, their views about migration impacts are more evenly divided: the net rating of the economic impact of migration was modestly negative (-17), while the net rating of the cultural impact was positive (+11). Much of the demand for reduction seen in 2003 may have reflected concern about the likely future effects of continued high migration rather than a perception that immigrants had already had significant negative effects. 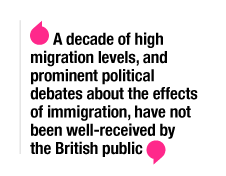 In 2011, the public's verdict on impacts was more downbeat. The net rating of economic impacts fell five points to -22, while the net rating of cultural impacts swung more sharply, falling 25 points to -14. The largest increases in both cases were in the share judging migration's effects as very negative (i.e. "extremely bad for the economy" or "cultural life undermined"). A decade of high migration levels, and prominent political debates about the effects of immigration, have not been well-received by the British public. Despite the hard economic times, it also seems that it is concerns about culture which have risen the most over the decade. However, despite this negative shift, nearly half of respondents (48 per cent) perceive the economic impact of migration to be neutral or positive and slightly more than half (51 per cent) feel the same way about the cultural impact. Even after the largest and most sustained inflow of migration in British history, the public remain much more evenly divided when they think about the effects of the migrants who have already settled than when they are asked about whether more migrants should be allowed into the country. 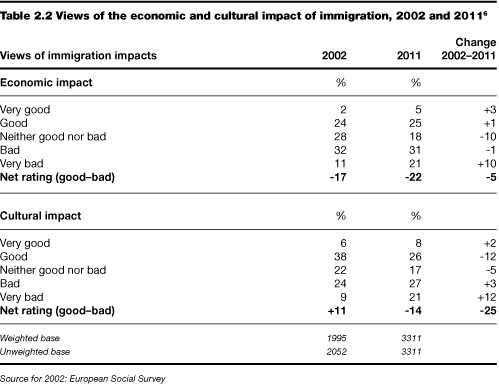 Having looked at views about inflows and impacts separately, we now move to consider the relationship between the two. Table 2.3 examines whether overall views about immigration's effects and demands for reduced inflows are more closely related to judgements about economic effects or about cultural effects. Views about immigration's effects were summarised using responses to the following question included on the 2011 survey:

Using this card, please tell me on a scale of 0 to 10 how good or bad you think the settlement of migrants in the last ten years has been for Britain?

Overall opinion of the settlement of migrants is negative, with 60 per cent of respondents rating the impact negatively, and only 24 per cent holding a positive view (a net negative rating of -36). Interestingly, this overall rating is more negative than ratings of either the economic or cultural impacts of migration, so many respondents were negative about migration overall despite being positive about its economic or cultural effects. 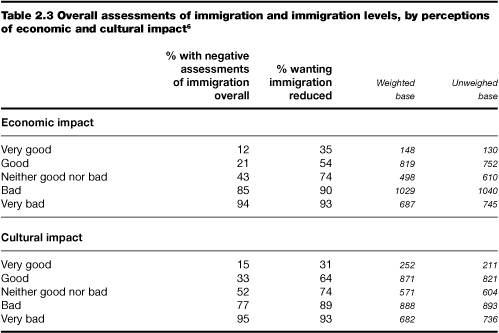 How have perceptions of the impacts of immigration changed across the public as a whole? One possibility is that anxieties have become more widespread, spreading from social groups who were already concerned about migration impacts to other groups who were previously sanguine about its effects. Another is that immigration attitudes have become more socially polarised, with groups who were already negative about migrants becoming more anxious while those who were unconcerned remain so. A third possibility is that concern about migration has become more socially differentiated, with different groups expressing different anxieties. Citizens who are in economically marginal positions may worry more about economic impacts, while those in more secure employment may focus on cultural impacts.

We explore the links between economic and cultural anxieties and judgements about immigration impacts by comparing the attitudes of groups who are more or less likely to feel culturally and economically threatened by immigration. It has been assumed that those with lower or less secure incomes, and those in jobs exposed to immigrant competition, will be more economically threatened by migrants, while cultural threat will be concentrated among those with more negative views of diversity, such as the racially prejudiced, those with low education levels and those with no close social contact with migrants from different cultures.

Table 2.4 presents the results of this analysis. Several key messages emerge. Firstly, even in 2002 there were significant social divisions in judgements about immigration. More economically threatened groups, such as poorer and working class Britons, gave more negative assessments of both the economic and cultural impacts of migration than economically secure groups. For example, less than four in ten of those from a professional occupational group saw immigration as having negative economic impacts, compared with more than five in ten of those from a routine occupational group. The same is true of groups more likely to perceive cultural threat from immigration, such as those with low education levels or admitting to some racial prejudice: such groups are 15 to 25 percentage points more negative about both forms of impact than more cosmopolitan groups such as those with degrees or those with some migrant heritage.

Secondly, attitudes have socially polarised over the decade: in nearly every case, the negative shift in assessments of immigration impacts is much larger for the groups that were already threatened more by migration. The proportion of those with a degree who think immigration has a negative effect culturally has risen by seven percentage points between 2002 and 2011, compared with a 20-point rise for those with no educational qualifications in the same period, who already held more negative views. The British in 2011 are thus much more internally divided about immigration than they were in 2002. Majorities of the more threatened groups are consistently negative about immigration impacts, while among more secure groups most remain positive or neutral. 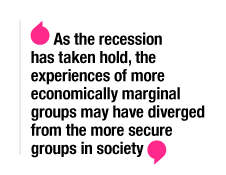 Finally, this polarisation is more evident on views about the economic impact of immigration. Economically comfortable and culturally more cosmopolitan groups show little change in their assessments of economic impacts, but economically and socially insecure groups have become dramatically more hostile. By contrast, all groups have become at least somewhat more negative about the cultural effects of migration, although this change has been more marked for those groups likely to feel more culturally threatened by immigration. This may reflect the dual impact of both immigration and recession on the more economically marginal groups in society. As the recession has taken hold, the experiences of more economically marginal groups such as those with low or insecure incomes may have diverged from the more secure groups in society, as both their general economic anxiety  and their specific concerns about immigration have risen. 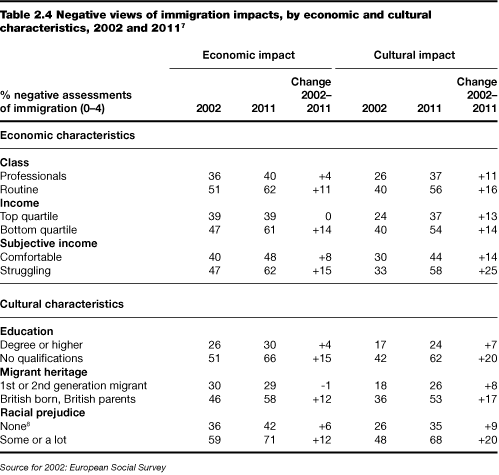