Scottish independence / More devolution for Scotland within the UK?

More devolution for Scotland within the UK?

While support for leaving the Union may only be a minority position at present, and as we saw earlier (Figure 7.1) a majority (58 per cent) favour some form of devolved government, this does not necessarily mean the Scottish public are happy with the current devolution settlement. After all, Scottish Social Attitudes has persistently found that far fewer people (in 2011, 38 per cent) feel that the Scottish Government has most influence over the way that Scotland is run than feel it should have most influence (in 2011, 78 per cent) (Ormston and Reid, 2012).6 This contrast would certainly suggest that a move towards more powerful devolved institutions would be in step with the broad thrust of public opinion.

Views in Scotland on who "ought to make most of the important decisions for Scotland" in various policy areas provide more precise evidence for that assertion. As Table 7.5 shows, in 2010 two-thirds of Scottish Social Attitudes respondents said that the Scottish Parliament ought to have that role so far as the health service is concerned, while almost as many said the same about schools. These of course are both areas where primary responsibility already lies with the Scottish Parliament. However, as many said the same of welfare benefits, and nearly three in five said so for taxes, both of which are still largely the preserve of Westminster. The one policy area where a majority of people in Scotland feel that decisions should be made by the UK government is defence and foreign affairs, where only around three in ten reckon the Scottish Parliament should make the decisions. 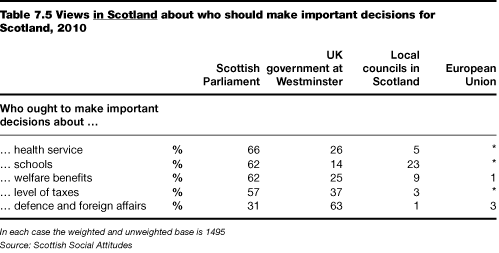 Responsibility for defence and foreign affairs is, of course, arguably the essence of being an independent state. This last finding is thus in line with our earlier evidence on the level of support for independence, at around three in ten. But otherwise, it would seem that the instinctive reaction of the majority of people in Scotland is that decisions about the country's domestic affairs, including the financially crucial areas of taxation and welfare benefits, should be made in Edinburgh. It is often argued that these two areas - and especially welfare benefits - should remain primarily a UK-wide responsibility because the resources for insuring individuals and communities against the risks (such as unemployment) to which they are subject are best pooled across the country as a whole. At the same time, opponents of devolving benefits argue that a common welfare system is crucial to ensuring that all UK citizens enjoy exactly the same social rights (see, for example, Commission on Scottish Devolution, 2009). However, it seems that these arguments cut little ice with the Scottish public.

A critical reader of these findings might wonder whether references in our questions to "taxation" and "welfare benefits" are rather abstract. Perhaps some survey respondents do not fully appreciate the implications of the proposition that decisions about these areas should primarily be made by the Scottish Parliament rather than the UK government. Maybe if we referred explicitly to specific, high profile taxes and 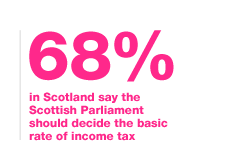 benefits, the pattern of response might look different. These considerations prompted us to ask on our 2011 survey who should make most of the important decisions for Scotland about "the basic rate of income tax" and "the old age pension paid out by government".7 However, in practice the answers proved to be little different from those shown in Table 7.5. Sixty-eight per cent say the Scottish Parliament should make decisions about the basic rate of income tax, while 65 per cent say the same of the old age pension. Just 29 and 33 per cent respectively nominate the UK government.8 So it appears that - whatever way the question is asked - there is majority support in Scotland for devolving responsibility for the bulk of the country's domestic affairs, including the key areas of taxes and benefits, to the devolved institutions.

However, this does not mean that some form of 'devolution max' is necessarily the option for Scotland's future that is most preferred by a majority living north of the border. This becomes apparent in the pattern of responses to a question on Scotland's constitutional future that has been asked on Scottish Social Attitudes in the last two years. Unlike the question summarised in Table 7.1, this more recent question includes an option intended to refer to 'devolution max'. The question reads as follows:

Which of the statements on this card comes closest to your view about who should make government decisions for Scotland?

The Scottish Parliament should make all the decisions for Scotland

The UK government should make decisions about defence and foreign affairs; the Scottish Parliament should decide everything else

The UK government should make decisions about taxes, benefits and defence and foreign affairs; the Scottish Parliament should decide the rest

The UK government should make all decisions for Scotland

The first statement is intended to imply independence (without referring explicitly to that word). The second is intended to describe 'devolution max', while the third and fourth statements refer to the status quo and no devolution at all respectively. 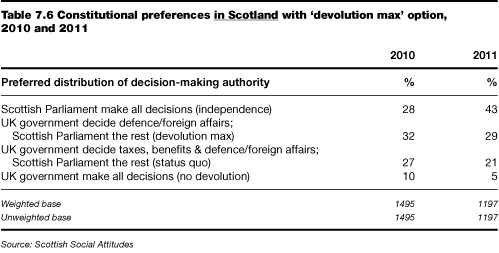 As Table 7.6 shows, in fact the principle of 'home rule' or 'devolution max' appears to be the first preference of only around three in ten people in Scotland and is apparently only a little more popular than the status quo. Meanwhile, in our most recent survey at least, it appears to be less popular than independence which, when described as it is here, attracts rather more support than it did at the question reported in Figure 7.1 (albeit still only from a minority).9 Evidently there is something of a puzzle to be unravelled here.

The solution is, in fact, relatively simple. Most people who believe that Scotland should be independent also believe taxation and welfare benefits should be decided by the Scottish Parliament.10 But so too do over half of those who oppose independence.11 Thus the responses reported in Table 7.5 give the impression that 'devolution max' has majority support not because it is necessarily the single most popular option, but rather because it is the one option around which both 'nationalists' and many 'unionists' can seemingly potentially coalesce. It is perhaps not so surprising after all that the SNP have been willing to keep open the possibility that a 'second question' on more devolution might appear on the ballot paper, while both the UK government and some Labour politicians have indicated a willingness to contemplate further devolution too.