Scottish independence / What about England?

We have seen that some form of 'devolution max' may be the constitutional option that best meets the aspirations of the majority in Scotland. Yet whatever Scotland's preferences may be, any move to introduce further devolution in Scotland also needs to be acceptable to the public in England - otherwise it may put the stability of the Union at risk. But the more that is devolved to Scotland, the greater the apparent risk that the anomalies created by asymmetric devolution will come to be unacceptable to the public south of the border. Such a risk might be considered even more serious if there are already signs of an 'English backlash' taking place in response to the existing devolution settlement. And there are indeed some signs of such a development (for a more extended discussion see Ormston, 2012).

This is perhaps most evident in respect of views about the current financial arrangements, under which funding of the devolved institutions is primarily via a block grant from Westminster. These arrangements, which in fact pre-date the Scottish Parliament, result in public spending per head in Scotland being some 20 per cent or so higher than in England (HM Treasury, 2011). In popular debate, this has sometimes been presented as an arrangement that enables Scots to enjoy free university tuition, free personal care for older people, and free prescriptions, all at England's expense at a time when England itself is unable to afford such policies (see, for example, Heathcoat Amory, 2007; Heffer, 2007). Table 7.7 shows the pattern of responses in England over the last 10 years or so on the question of whether Scotland gets more or less than its fair share of public spending. Until 2007, a little over two in ten in England were of the view that Scotland secured more (either "much" or "a little") than its fair share. But in 2007 that proportion increased to around three in ten, and since 2008 it has consistently been about four in ten. Although there is no evidence of a further increase since 2008, it is nonetheless the case that nowadays more people in England think that Scotland gets more than its fair share of public spending than believe it does not.

On the other hand, in spite of this increase, the perception that Scotland receives an unfair share of public spending remains a minority one. One reason for this is that, when asked this question, around one in four people in England say they do not know. This suggests that Scotland's share of public spending is not a particularly salient issue for many people in England. It is also arguable that the more responsibility the Scottish Parliament is given for raising its own tax revenues, the less it will be possible to present any higher level of public spending in Scotland as the result of an unfair subsidy provided by English taxpayers. So, in this instance at least, more devolution for Scotland could be regarded as increasing the fairness of constitutional arrangements for both Scotland and England. 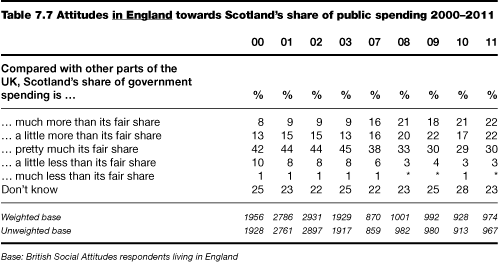 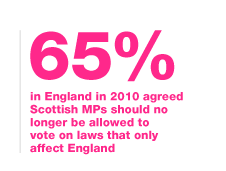 However, the same could certainly not be said of the so-called 'West Lothian' question - the name coined for the argument that it is unfair that Scottish MPs can continue to vote in the House of Commons on English laws when, since devolution, MPs representing England cannot vote on similar laws for Scotland (Conservative Democracy Task Force, 2008). In this case, the more power and responsibility that is devolved to the Scottish Parliament, the more such an imbalance may appear to be an unfair anomaly. In any event, as can be seen from Table 7.8, the current position on this issue is widely regarded with disapproval in England. Around three-fifths in 2010 agreed that Scottish MPs should no longer be allowed to vote on laws that only affect England. Moreover, there are signs that feelings about this issue have become somewhat more intense - the proportion who "agree strongly" that the situation is unfair has gradually increased from 18 per cent in 2000 to 31 per cent in 2010 (our most recent reading). Given this, it is perhaps not surprising that in January 2012 the UK government created a commission chaired by a former House of Commons clerk, Sir William McKay, to see whether the procedures of the House of Commons could be amended to address concern on this issue - although it is widely regarded as difficult to solve, both technically and politically (Hazell, 2006).12 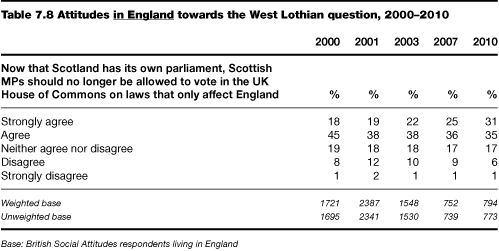 Do these signs that people in England are growing rather more concerned about the apparent unfairness of the current devolution settlement mean that they are also coming to the conclusion that England too should enjoy some measure of devolution? Whether, though, such a development would make it easier or more difficult for the Union to be maintained is the subject of continued debate (Hazell, 2006). We asked respondents for their views as follows:

With all the changes going on in the way the different parts of Great Britain are run, which of the following do you think would be best for England ...

... for England to be governed as it is now, with laws made by the UK parliament,

for each region of England to have its own assembly that runs services like health,

or, for England as a whole to have its own new parliament with law-making powers?13

As Figure 7.2 shows, in practice there is little sign that England has come to embrace devolution for itself. A little over half (56 per cent) believe England's laws should continue to be made by the UK Parliament, in line with most of our readings since the advent of devolution in 1999. Support for the creation of an English Parliament similar to that which now exists in Scotland (the third option in our question) stands at just one in four (25 per cent), though it garners rather more support nowadays than it did between 1999 and 2007. Even less popular, favoured by one in eight (12 per cent), is a more limited form of devolution to each of the regions of England; the popularity of this idea has clearly waned since the defeat in a referendum in November 2004 of proposals to create an elected regional assembly in the north-east of England (Sandford, 2009).14 There seems to be little immediate prospect of building a majority consensus for a system of devolution for England that would in any way match the apparent desire for self-government north of the border. 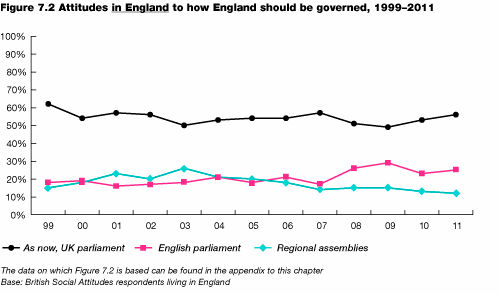 However, the most important question about public opinion in England, at least as far as the future stability of the Union is concerned, is whether people are sufficiently dissatisfied with the apparent privileges enjoyed by Scotland that they are beginning to think it might be better if Scotland were to become independent after all. In Table 7.9, we show how people in England have responded when asked the question about how Scotland should be governed that has been asked regularly on Scottish Social Attitudes (reported in Figure 7.1). This shows there is some evidence of increased support in England for the idea that Scotland should leave the UK. Between 1999 and 2007 the proportion who supported that proposition was around one fifth, but in 2011 increased to about one quarter (26 per cent).15 So while the idea that the Union should be broken up remains even more clearly a minority view in England than it is in Scotland, it seems that support in England for the continuation of the UK is potentially vulnerable to erosion. 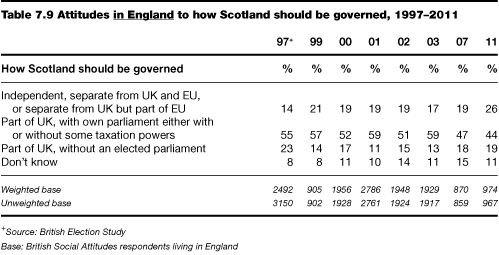