Welfare has become a highly-charged political issue in recent years. The Welfare Reform Act, which passed into law in 2012, is routinely being described as legislating for the biggest change in the welfare system for more than 60 years. Its main elements, to be implemented over a decade, are designed to limit eligibility for a range of benefits, to incentivise employment for those able to work, and to streamline the system in ways that will achieve a sustainable long-term reduction in levels of welfare spending. There are grounds to expect the views of the public, and those of supporters of the Conservative Party in particular, to be moving in a similar direction. Certainly, an equivalent trend occurred from the late-1990s, when New Labour repositioned itself on issues such as equality and government intervention, and the views of the public in general, and the Party's supporters in particular, subsequently became less pro-welfare (Curtice, 2010). With the coalition government debating and implementing more far-reaching policies to reduce government provision of welfare in Britain, we might expect to see pro-welfare attitudes decline further. 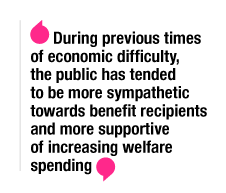 Major reform is, however, being pursued by the coalition government at a time of double-dip recession in the economy, and the highest levels of unemployment seen for almost two decades. British Social Attitudes surveys have demonstrated that, during previous times of economic difficulty, the public has tended to be more sympathetic towards benefit recipients and more supportive of increasing welfare spending (Taylor-Gooby, 2004). Clearly a shift in opinion along those lines would place the public in increasing opposition to a major plank of the Coalition's policy platform, if it were repeated during the current economic downturn. But is that really happening? Are public attitudes to welfare adhering to the cyclical pattern observed in the 1980s and 1990s, or is this recession turning out somehow to be different? And, if so, is this a result of the public's views moving in line with the welfare agenda of the Coalition?

This chapter addresses these questions by exploring the public's views on various aspects of the welfare system. We begin by considering what people think the proper role of government should be in welfare provision and attitudes towards levels of spending on welfare. We then explore attitudes towards benefit recipients and the extent to which they are deemed to deserve help from the state. Next we examine opinions about the way the welfare system operates in practice and how it could be improved. Throughout, we consider attitudes to different types of benefits and benefit recipients, to determine whether the public adopts a holistic stance on welfare or whether attitudes are more nuanced.

Having outlined current trends in attitudes to welfare, we move on to examine whether these are occurring in all sections of the population or whether the views of particular groups are moving in quite different directions. How far do individuals' attitudes match those of the political parties with which they identify? Do those who rely on, or are more likely to rely on, benefits hold different views to those who are more economically advantaged? In addressing these questions, we aim to discover whether the British public is becoming more or less united in its aspirations and expectations for welfare, and whether unsuspected social divisions could impede the government's agenda for reform.