A key element of the argument that modern (or postmodern) societies such as Britain have experienced a process of individualisation is that people are now more weakly attached to traditional social identities such as religion or social class. They may well also lose their sense of affinity with traditional collective institutions of democracy, such as political parties. These identities can be regarded as the lynchpins of social attitudes. Religion, for instance, is often regarded as a key source of moral values, while people's subjective sense of their social class is often thought to shape their outlook on economic issues. In particular, 'feeling working class' is often thought to provide a foundation for a collective sense of social solidarity, on the grounds that a relatively active state can help protect workers from the worst privations of a capitalist market. Finally, those who identify with a particular political party are often thought likely to be persuaded to adopt (or at least concede to) that party's views, and are certainly more likely to feel engaged in the political process.

We start by examining whether people's attachments to these three identities are indeed in decline, beginning with religion. Here there is little doubt that a substantial change has taken place, with a marked decline in the proportion who describe themselves as belonging to a particular religion. In 1983, around two in three people (68 per cent) considered themselves to belong to one religion or another; in 2012, only around half (52 per cent) do so. As our Personal relationships chapter sets out, this decline is in practice a decline in attachment to Anglicanism; in 1983 two in five people (40 per cent) said they were Anglican, and the Church of England could still reasonably lay claim to being England's national church (and thus, arguably, to some extent its fount of moral authority). But now only 20 per cent do so. In contrast, the proportion saying they belong to a religion other than Christianity has tripled from two to six per cent. Britain's religious landscape has not only become smaller but also more diverse.[2] 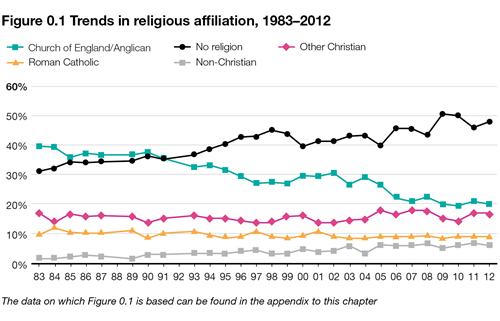 Middle or working class - or neither?

The picture is not the same, however, when it comes to social class. To assess this we ask people: "Do you ever think of yourself as belonging to any particular class?" In 2012, 50 per cent responded by saying they were either middle or working class. Those who did not respond in that way were prompted: "Most people say they belong either to the middle class or the working class. If you had to make a choice, would you call yourself middle class or working class?"

In fact, people are no more or less willing now to acknowledge a class identity without prompting than they were 30 years ago, and the proportion who refuse to choose a class identity, even after prompting, remains relatively small - just five per cent. Nor has the balance between those who describe themselves as middle class and working class changed as much as we might expect, given the substantial changes in the kinds of jobs people do over the last three decades. So, despite the fact that the proportion of people with a classifiable occupation that might 'objectively' be regarded as middle class increased from 47 to 59 per cent between 1983 and 2012, only around a third of people describe themselves as middle class (35 per cent now, compared with 34 per cent in 1983) while six in ten (60 per cent) call themselves working class.[3] Although Britain has become a majority white-collar society, subjectively it is still inclined to feel working class, albeit perhaps not as closely as it once did (Heath et al., 2009).

Even if people are no less likely to identify with a social class now than they were in the 1980s, they are certainly much less likely to identify with either of the political parties traditionally associated with the middle (Conservative) or working (Labour) classes. Back in 1983, 72 per cent identified with one of these parties, while 87 per cent said they supported any political party, including the then Liberal/SDP Alliance. Now less than two-thirds (63 per cent) identify with one of the two traditional class parties, and around three-quarters (76 per cent) claim an adherence to any political party.

The decline in party identification becomes even clearer if we look at how strongly people identify with whichever political party they say they support. In 1987 (when we first asked this question) nearly half (46 per cent) said they were a "very" or "fairly strong" supporter of a political party. Now the figure is under a third (31 per cent). Conversely, while in 1987 nearly half (48 per cent) said they were not a strong supporter of a party, or did not support any party at all, now over two-thirds (69 per cent) fall into this category. Over the last 30 years, the hold that the country's political parties have on the affections of the British public has weakened at least as much as  that of its religious institutions. 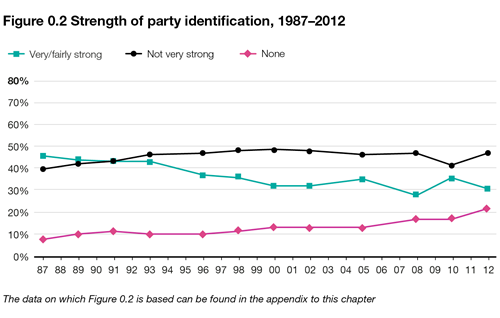 So far as identities are concerned, then, some of the trends of the last 30 years are in line with what we would expect were society becoming more individualised, as we see fewer people identifying with two previously important types of institution (religious institutions and political parties). As our Personal relationships and Politics chapters show, in both cases there is a clear generational element to these trends, with each new generation less religious or less likely to identify with a political party than the one before. As a result, attachment to these two types of institution is likely to continue to decline further in future.

On the other hand, it appears that what is often thought to be a particularly important social phenomenon in British life, social class, is undiminished as a source of subjective feeling. That suggests a need for caution before accepting some of the more sweeping claims relating to individualisation.