British national identity is commonly seen, by politicians and the public alike, as being synonymous with democracy and democratic values. Echoing earlier speeches on Britishness made by Tony Blair and Gordon Brown, in 2011 David Cameron addressed the need for Britain to develop a clear sense of shared national identity, and listed democracy and the rule of law as two of the key values that should be part of this shared identity.[1] As the National Identity chapter, by Zsolt Kiss and Alison Park, describes most people (85 per cent) think that having respect for Britain’s political institutions and laws is very or fairly important for being truly British. People are more likely to consider this as being important than having been born in Britain (74 per cent) and much more likely to consider it as being important than having British ancestry (51 per cent).

But what do people actually mean when they refer to Britain as a democracy or say that it is important for its citizens to adhere to democratic values? To what extent do people have a shared vision of the essential features of a democratic system or agree on the extent to which these features are currently being realised in Britain? 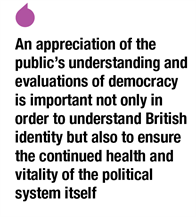 An appreciation of the public’s understanding and evaluations of democracy is important not only in order to understand British identity but also to ensure the continued health and vitality of the political system itself. Unless people care about democracy and are committed to democratic values, these values may come under strain, especially in times of war or in the face of economic, environmental or other pressures (Coggan, 2013). If people have high expectations of democracy but feel that the current system fails to live up to these expectations, the perceived ‘democratic deficit’ may undermine the legitimacy of the system and erode public support. Even in established democracies such as Britain continued dissatisfaction with how the process functions may alienate people from the political process, posing a threat to the representativeness of democracy as well as undermining the belief in democracy itself (Stoker, 2006; Birdwell et al., 2013).

The European Social Survey provides a unique opportunity to understand more about what it is that the public understands by and wants from democracy.[2] Whereas previous research on public attitudes to democracy has largely been restricted to asking people about their commitment to or evaluations of democracy in general, the 2012/13 European Social Survey contains a substantial battery of questions which ask respondents for their attitudes towards specific aspects of the democratic system including its procedures, institutions and outcomes (Kriesi et al., 2012).

In this chapter we use European Social Survey data to try to isolate exactly what it is about living in a democracy that people in Britain consider to be important. We examine the depth and breadth of their commitment to different aspects of democracy, and the extent to which there is consensus across different groups in society. The chapter also examines the extent to which people believe that the features they consider to be important in a democracy apply in Britain today, and thus whether or not there is a perceived ‘democratic deficit’ among the British public. Finally, we consider the potential consequences of any perceived deficit for future political engagement. Is it the case that dissatisfaction with democratic performance is leading people to become disillusioned with and disengage from politics? Or, as Pippa Norris has argued, is the democratic deficit part of a healthy democracy in which “critical citizens” continue to engage with and challenge the political system to improve (Norris, 1999; 2011)?

Answers to these questions may point to key areas on which policy makers seeking to maintain confidence in British democracy and re-engage with a disillusioned electorate in the run up to the 2015 general election should focus their attention. They are also pertinent to current discussions about the future of British democracy including the debate surrounding Scottish independence and the future of Britain in Europe, both issues that will or are likely to be decided by referendum.