In this, NatCen’s 33rd annual British Social Attitudes report, we endeavour to uncover the consequences of seven years of austerity for social and political attitudes in Britain.

The financial crash of 2008 and the "great recession" that followed left a lasting impression on the British economy that included slower economic growth, declining living standards and stagnant wages.

The political response has been a period of austerity in the form of public spending cuts and tax increases. Changes to the benefits system and the way we are taxed have, according to the Institute for Fiscal Studies (IFS), reduced household incomes by £1,127 a year. The IFS also says this austerity is set to continue, even deepen further, under the current administration, until the end of the decade at least. Now that the UK has voted to leave the European Union, additional spending reduction and tax increases may be in train.

We know then that the British public has been hit in the pocket, but what impact has this had on the way we view the world, our attitudes and perceptions of society, and our expectations of government? There are a variety of ways that the public could have reacted, and, of course, different people may react differently. But in financially straightened times, have we become more sympathetic to those who have less or do our personal financial worries take precedence? Has austerity divided the rich from the poor, the working class from the middle class? Have stagnant wages made us unhappy at work, or more grateful to have a job? Have we become more demanding of politicians or have we withdrawn from the political process?

NatCen's latest British Social Attitudes survey seeks to answer these questions - and more - by looking at the effect of austerity on attitudes in five important areas: class, benefits, work, the NHS and politics.

The recent period of austerity does seem to have affected the views of at least some British people – though not always in a straightforward fashion.

We observe a reaction against cuts in the form of increased support for higher spending on benefits for people who are disabled and single parents. But towards people without a job, especially those who don’t have children, the public remains unsympathetic.

Perhaps counter-intuitively for a period of comparatively slow wage growth, more people are positive about the quality of their jobs than in the past. And more people also tell us that they would work even if they did not need the money.

But there are also indicators that not everyone is finding work better than before – and certainly not easier. In particular, people in routine and semi-routine occupations are more likely to feel stress and less likely to have flexibility in the workplace than ten years ago. This comes at a time when people in other occupations are more likely to feel they have control over their working day.

Austerity has then seemingly made a difference, but when we examine how the public would like government to respond to the country’s financial predicament, we find them more divided than in the past.

The EU Referendum has highlighted some sharp divisions in British society and the closeness of the result presents a very definite challenge about how government can keep large minorities happy. We see similar challenges when it comes to what people want government to do on public spending.

After having apparently failed to make an impact for some time, austerity does now seem to have awakened support for higher public spending; more people want an increase in spending than for a decade. Here we draw on one the longest running and most revealing questions on the survey. For ten years a majority have said that public spending should not be increased, yet now the public is evenly split over whether there should be more spending or whether it should remain at the same level.

Attitudes to taxation and spending on health, education and social benefits: 1983 - 2015 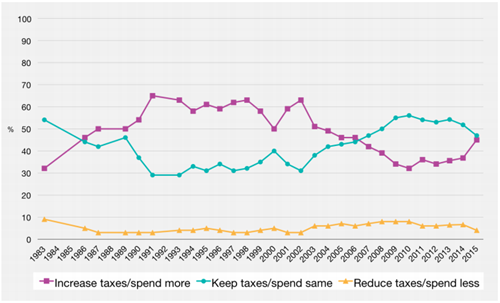 This division over public spending also extends to what it should be spent on. We all (93% of us at least) recognise that the NHS is facing a funding crisis – and increasing taxes is the single most popular solution. However, many people prefer other solutions, including the NHS simply learning to live within its means. Meanwhile, even on a policy such as the spare room subsidy, where if you believed the popular narrative you might think it was universally despised, a large minority, and in particular young people, are in favour.

We see then that austerity has had an impact on public attitudes, and not just the pound in our pockets. But, at the same time, some things have not changed at all. The public’s sense of social class has withstood dramatic long-term changes in the labour market. As many as 60% of us describe ourselves as working class, (including half of people in managerial and professional occupations) almost exactly the same proportion as in 1983.

We have been through a period of intense public debate about Britain’s constitution in the form of the Scottish Independence referendum, English votes for English laws, and a dramatic General Election (the survey was carried out a little under a year before the EU Referendum). So are people more interested in constitutional change? Not necessarily. While support for electoral reform, for example, appears to have reached an all-time high, it is still only a minority preference.

Meanwhile, although austerity appears to have had a discernible impact on attitudes, for the most part the changes are not big attitudinal leaps, but rather small steps. This is of course usually how attitudes change. But a cohesive democracy should worry about a public that describes society as divided by class and says social mobility is decreasing, especially if the jobs of those at the bottom are getting worse while those of others get better or if the public is gradually losing faith in the electoral system. We must think about how we can find consensus on a way forward for the health service and the welfare state. Because with austerity expected to continue until at least 2020 these small steps might well add up to a leap.