Key findings / A backlash against austerity?

A backlash against austerity?

After seven years of government austerity programmes by the Conservative-Liberal Democrat coalition and then Conservative majority government, the public is turning against spending less.

For the first time since the financial crash of 2007-8, more people (48%) want taxation increased to allow greater spending, than want tax and spend levels to stay as they are (44%). More people (42%) agree than disagree (28%) that government should redistribute
income from the better off to those who are less welloff. Shortly before the financial crisis fewer people supported redistribution than opposed it (34% and 38% respectively in 2006).

Support for ‘tax more, spend more’ at highest level in a decade 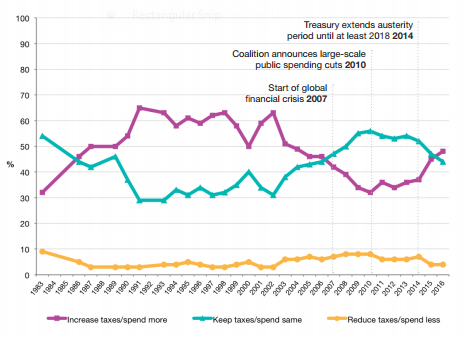 However, while these represent notable changes as compared with recent years, they still only represent a partial move back to an earlier mood. The 48% of people who now want more taxation and spending compares with a joint-record low of 32% in 2010, but highs of 63% in 1998, and 65% in 1991.

A major focus of the austerity programme was on policies to reduce welfare spending on those of working age via reductions in benefit levels and new (DWP, 2015). As many of these changes have now been implemented it is interesting to see two notable changes in how favourably people view benefit recipients. First, the proportion who say most dole claimants are “fiddling” has dropped from 35% in 2014 to 22% in 2016 – its lowest level since the question was first asked on the survey in 1986. Secondly, we find the proportion of people (21%) that agree that most social security claimants do not deserve help is at a record low, down from 32% in 2014. We will need to see whether these drops are still in evidence
in future years before we can be sure they represent a major change of outlook. In the meantime, depending on your outlook, you can either see this as the response to successful efforts to ensure benefits go to those most in need; or, more negatively, more people
feeling that recent changes have shown recipients to be more deserving than previously thought.

In contrast to help for those of working age, retirement age benefits have largely been protected from austerity and the State Pension has in fact had significant growth due to the ‘triple lock’3 (Thurley & Keen, 2017). Whether the ‘triple lock’ should be kept became one of the key battlegrounds of the recent election. This year, for the first time in more than 30 years, pensions are not the public’s top priority for extra spending on benefits. The proportion identifying retirement pensions as being among their top two priorities for extra welfare spending is now just 60%, down from 72% in 2014 and the lowest it has ever been. It seems that the public have recognised the fact that successive governments have been successful in raising the relative incomes of pensioners and this may be an area where people are beginning to feel increased spending is no longer needed.