Brexit and immigration: a country divided

What the 2016 EU referendum decision actually gave a mandate for in the Brexit negotiations is a matter of near-daily debate in parliament and the media. While our report does not address this issue, it can help settle the hotly contested topic of what issues were at stake when voters went to the polls. 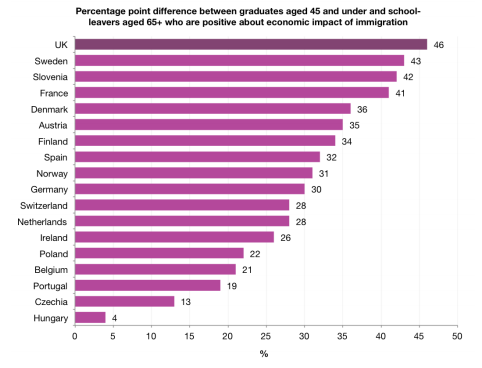 Our analysis suggests that the idea that the referendum was a lightning rod for a rising ‘anti-politics’ tide is wide of the mark. People’s level of trust in government at most played only a minor role in influencing how they voted. Instead, the result reflected the concerns of
older, more ‘authoritarian’ or social conservative voters who were particularly worried about immigration. Any suggestion that immigration was not at the heart of this vote runs counter to what we have found. 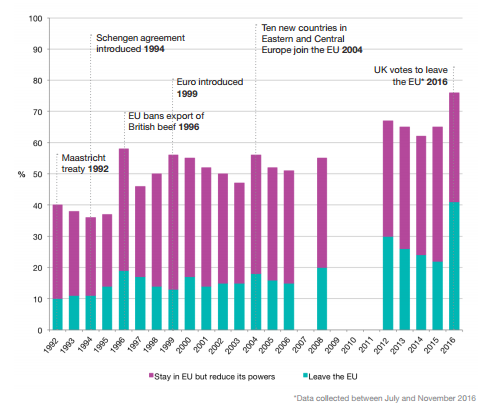 The division about immigration that was evident in how people voted in the EU referendum is mirrored in attitudes to immigration itself. In the years leading up to the vote there was a stark and growing divide between young people with a degree education and older people with no formal qualifications in their views about the economic impact of immigration. For example, 62% of those with a degree, and 48% of those aged 18-29 now believe immigration has
a positive impact on the economy. In contrast, just 29% of those with GCSEs as their highest level of qualification or no qualifications and just 29% of those aged over 70 hold the same view. Our analysis of the latest European-wide data on this subject shows that this social divide in attitudes towards immigration is bigger than anywhere else in Europe.

Although views about attitudes towards immigration may have polarised, it is not clear that people have become more concerned about immigration. However, there is widespread agreement that the country should be selective in who it allows to come here. Significant majorities feel the ability to speak English (87%, up from 77% in 2002), a commitment
to the British “way of life” (84%, up from 78%) and possessing needed skills (82%, up from 71%) are important criteria for selecting migrants.