Social divisions in belief and behaviour

As a global problem, climate change affects everyone. But within Britain opinion is divided. This chapter asks to what extent people in Britain believe humans cause climate change, think it is a problem, and feel that citizens and governments are likely to be able to reduce it. Also, what are the main social divisions in attitudes to climate change, and how much does opinion differ between supporters of different political parties?

Most people believe climate change is happening but far fewer believe it is mainly caused by humans or are worried about it. Older people are comparatively less worried and think that the consequences will not be so bad.

Views on existence, causes and consequences of climate change, by age 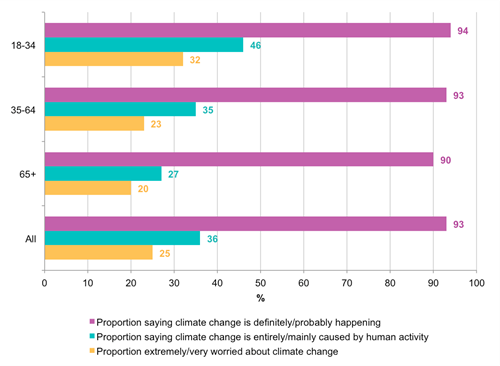