A more 'informed' public? The impact of the Brexit debate

What impact has the debate about Brexit before and since the referendum had on public attitudes to the EU? Has support for leaving increased because people have become more concerned about the implications of membership for their sense of identity, and are now more optimistic about the consequences of leaving?

Or has it risen because of a strengthened relationship between voters’ attitudes towards the EU on the one hand and their sense of identity, their values and their views of the consequences of leaving on the other?

Support for leaving the EU has increased considerably since 2015 among those who feel EU membership undermines Britain’s identity, and those who think that leaving the EU would make the economy better.

Support for leaving the EU, by attitudes towards the EU 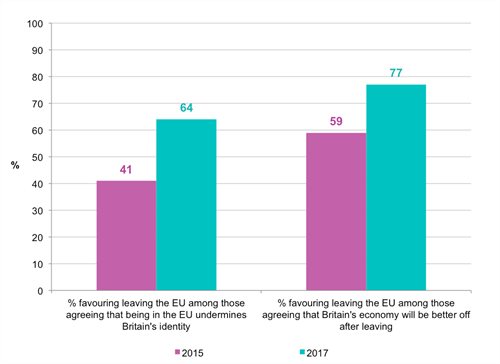