In this chapter we explore changing attitudes towards gender roles in work and at home, as well as views on online sexist bullying and unsolicited comments. We find the British public continues to move away from conservative views of men as breadwinners and women as homemakers, with narrowing divides in views between different demographic and socio-economic groups. Despite this the past five years have seen little change in views of whether mothers should work. Meanwhile there is near consensus in condemning online sexist bullying, and making comments on a woman’s appearance in the street is widely seen as wrong.

Views on gender roles have become less traditional over the past three decades, including a notable change in attitudes since 2008. 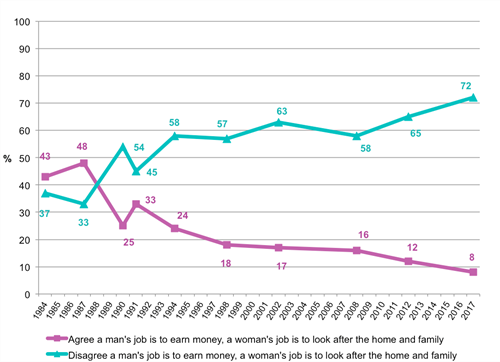