Have attitudes evolved in line with official trends or political and media discourse?

Current levels of poverty and inequality in the UK are similar to those reported around the time of the 2008 financial crisis, while political discourse and media coverage appear to suggest that they are unprecedented. Given this disconnect, this chapter examines how attitudes towards poverty and inequality in Britain are changing, and whether their evolution more closely aligns with official trends or developments in political and media discourse. On the whole, changes in perceptions of the scale, nature and acceptability of poverty and inequality more closely reflect trends in the portrayal of these concepts by politicians and the media, as opposed to the picture presented in official figures.

Labour Party supporters are much more likely than those supporting the Conservative Party to think there is "quite a lot" of poverty in Britain.

Perception that there is "quite a lot" of poverty in Britain, by party political support, 2006–2018 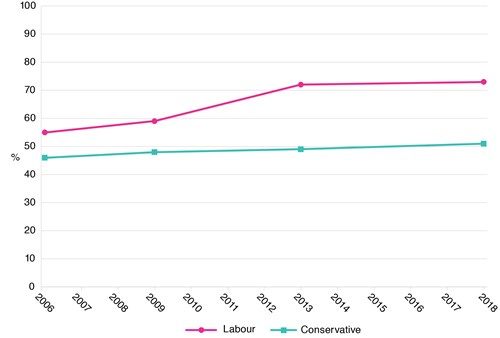