Public attitudes within the context of legal reform

Since British Social Attitudes (BSA) began, we have seen major changes in public attitudes to sexual relationships as well as the legal frameworks that support them. Our attitudes to gender have also transformed, with a sustained shift away from support for traditional gender roles. In this chapter we explore attitudes towards one of the most recent reforms in this area: the extension of civil partnerships to opposite-sex couples. We also explore ‘common law marriage’: in a context where couples increasingly choose to live together without formalising their relationships, the question of legal protections for cohabiting partners is now moving up the political agenda. Finally, we look at attitudes to gender in the context of proposed legal reforms to the Gender Recognition Act, which would give transgender people the right to declare and define their own gender identity.

The liberalisation in attitudes to sexual relationships observed since first recorded by BSA in the 1980s appears to be slowing down, perhaps reflecting the marked divides between the attitudes of religious and non-religious people in this sphere. 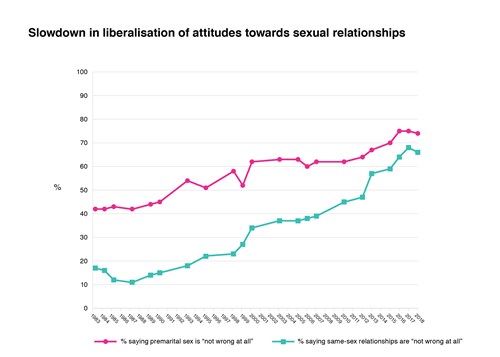