The past two decades have seen international conflict involving religion and domestic religious organisations putting themselves at odds with mainstream values. Against this backdrop, we compare religious identification, behaviour and belief among the British public. We find a dramatic decline in identification with Christian denominations, particularly the Church of England; a substantial increase in atheism and in self-description as "very" or "extremely" non-religious; and very low confidence in religious organisations, but tolerance of religious difference.

Over time, there has been a dramatic decline in the proportion of people who identify with Christianity along with a substantial increase in those with no religious affiliation, and a steady increase in those belonging to non-Christian faiths. 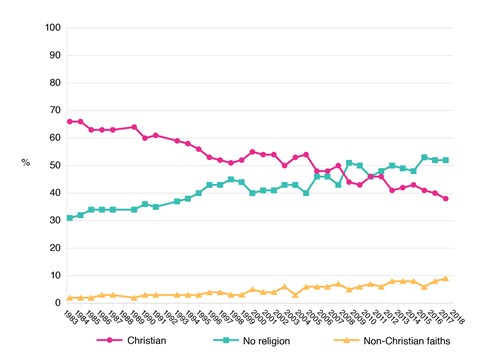