Public attitudes in the context of COVID-19 and Brexit

Since the National Centre for Social Research’s British Social Attitudes survey began in 1983, it has regularly asked a representative sample of people their views about a wide range of topics. Some issues are addressed almost every year, and, as a result, the survey has built up a unique body of robust evidence on how Britain’s social and political mood has evolved during the last four decades – and in so doing provided some vital clues as to the events and social developments that have brought about changes in what Britain thinks. In this chapter, we examine some of the key trends in how people have answered some of our longstanding, regular questions.

We do so at a time when Britain is experiencing unprecedented social and political change. Most obviously, the COVID-19 pandemic has posed a major challenge to public health and the country’s economy. As a result, there have been huge demands on the public purse. The government response to the pandemic has included support for jobs via the furlough scheme, additional NHS funding, and business grants. The National Audit Office estimated that this would cost £210bn for the first six months of the crisis (National Audit Office, 2020), and 9.6m jobs have been furloughed, from 1.2m different employers (HMRC, 2020). Meanwhile, far from being a short-term shock, it is now apparent that the country is going to have to live with the disease and its consequences for some time to come.

At the same time, Britain is in the midst of leaving the European Union. Having formally left the institution at the beginning of 2020 it is now scheduled to leave its single market and customs union at the end of the year. The decision, instigated by the outcome of a referendum held in 2016, represents one of the most significant public policy decisions the country has made since 1945 – and one which will also have an impact on the lives of its citizens for years to come. We cannot of course be sure how either COVID-19 or Brexit will eventually affect the public mood. Indeed, our most recent survey, undertaken in the second half of 2019, was not only conducted before it was even certain that Britain would leave the EU, but also before anyone had even heard of COVID-19. However, by looking at how attitudes towards public spending and welfare have evolved during the course of the last 36 years we can ascertain whether the dramatic expansion in public spending, including not least on welfare, is likely to prove at odds or be aligned with voters’ expectations of what their government should do. Meanwhile, by looking at developments in people’s sense of identity and immigration we can investigate the long-term strength of some of the forces that are thought to have given rise to the Brexit decision.

Attitudes towards taxation and spending on health, education and social benefits, 1983-2019 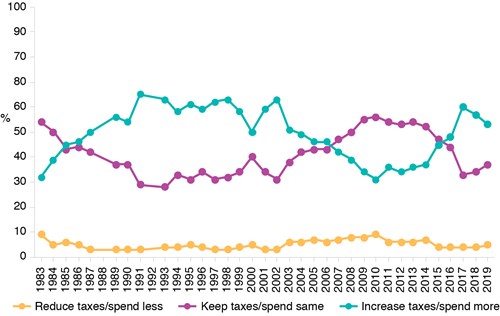