‘Culture war’ issues have become prominent in the media and in political debate. They reflect
disagreement about the portrayal of Britain’s colonial past and what should be done to recognise the identity and economic position of minority groups. Attitudes towards these issues are thought to align with people’s attitudes towards Brexit and, consequently, the ‘culture war’ could perpetuate the division between Remainers and Leavers that was a prominent feature of the 2019 election. This chapter analyses trends in public attitudes towards ‘culture war’ issues, the extent to which these attitudes are correlated with views about Brexit, and how far they reflect the ideological division between social liberals and social conservatives that underpins attitudes towards the EU. 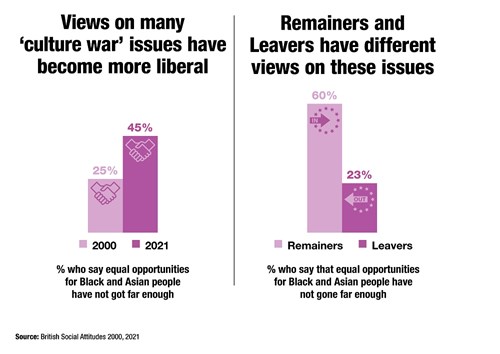 Attitudes towards Britain and Britishness have become more inclusive, while more now say
that equal opportunities for minority groups have not gone far enough.

Whether someone has a libertarian (socially liberal) or authoritarian outlook (socially
conservative) is strongly associated with where they stand on ‘culture war’ issues.

Leavers and Remainers diverge in their opinions on ‘culture war’ issues